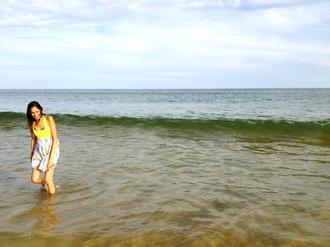 "You look away -- or you stop eating animals. And if you don't want to do either? Then you have to try to determine if the animals you're eating have really endured 'a lifetime of suffering'...For my own part, I've discovered that if you're willing to make the effort, it's entirely possible to limit the meat you eat to nonindustrial animals. I'm tempted to think that we need a new dietary category, to go with the vegan and lactovegetarian and piscatorian. I don't have a catchy name for it yet (humanocarnivore?), but this is the only sort of meat eating I feel comfortable with these days. I've become the sort of shopper who looks for labels indicating that his meat and eggs have been humanely grown (the American Humane Association's new ''Free Farmed'' label seems to be catching on), who visits the farms where his chicken and pork come from and who asks kinky-sounding questions about touring slaughterhouses."- Michael Pollan, An Animal's Place

I "didn't want to do either." For 18 years, I had looked away, and for 3 years, I had stopped eating animals. Neither of these ways worked for me. I decided if I was going to start eating meat again, I was going to be curious, educated, and responsible for what I was buying and consuming. If not for the animals, then for me. I don't want to be ingesting the meat of an animal that is diseased, depressed, and loaded up with hormones and antibiotics just so that it can make it to the age when it can be slaughtered. If I was going to eat real food and cut out all of the processed crap, then I would eat real meat too. I created this blog mostly to document my adventures in eating "primal" and starting to eat meat again. I am sure it will evolve along the way.